Oda is practicing in the courtyard. Hideyoshi is half asleep and get up. She walks into kitchen and there is a bucket of water on the table and start to washes her face.

The kitchen help look a her and have no idea as to what she is doing. I would say that the water in the kitchen would have to be carried from an outside source into the kitchen from out side source. Half asleep she reaches for her tooth brush but there is nothing there. Hideyoshi walks out side just as Oda make a swing the sword in front of her.

Hideyoshi open her eyes with as Oda yelling with the swing, but sword is about three feet away from Hideyoshi. But when you’re in front of it, it's like in your face. Hideyoshi jumps back and lands on her butt with a very surprise on her face. She jumps up runs inside as Oda watches. Oda can hear her running down the hallway to her room. She has on her school uniform because that all she has from her world. She remembers she is not at home anymore. She checks her phone, but there are no bars. She reads her history book to who is who in Japanese history and see how it works here.
Oda comes in and tell her she has the strangest outfits. Oda give her a box of silk cloth. Hideyoshi is in heaven. Oda is surprised, but don’t to let on the she is happy that Hideyoshi is happy.

Akechi on her knees sides open the door to the room. She is surprise to see Hideyoshi talking with Oda. She tells Oda that everything is ready. Oda turns to Hideyoshi and tell her she is coming too. Akechi is shocked and Hideyoshi ask as to where?

Oda and Akechi are riding two horses with Hideyoshi riding in front of Oda on her horse. Hideyoshi is in pain riding the horse. They come to the town that was burning the night before. You see women trying pickup what is left of the town.

ater what the problem was.

Hideyoshi doesn't think just telling the people work harder was nice. Akechi and Oda look at her as to what is she talking about. Oda is more of a suck it up and work harder with no thinking as to the feeling of the people that just got trashed. Hideyoshi goes down to the town and try to cheer up a little baby sitting on the back of her mother. She gives the baby a flower. The baby smiles. Then she pulls out her cell phone and set it on the post with the music playing.

All the people in the area are listening to the phone not knowing what it is and how it is making music. Hideyoshi is picking up things and help getting things together with the other people. She lifts a burnt beam and calls over someone to pick up the pot under the beam. Hideyoshi said the pot is still useful. She drops the beam on a door. The door flips a bucket into the air and it land on top of Hideyoshi head. When she takes it off she is covered with shoot.

She works with the people to plow the fields.

She makes friends with other people as they gather food stuff. All together they make a stew for everybody. Oda see this as very interesting because it seem to get in touch the feeling of the people instead of being hard nose of get over it and do it.
She Akechi if she could get some food and sweets? Akechi gives Hideyoshi a very mean look at being asked by a nobody to get something. Oda chimes in “Very well. Get some stuff from the storehouse.” Akechi is shocked to take something out of their storehouse.

Oda is happy to see the town people working together and the meal the cooked at the end of the day. Oda tells Akechi “She’s done well. She easily captured the peasants’ hearts. She will be a fresh wind, as we cannot foresee.” Akechi “You think so?” Oda “I am not mistaken about such things.”
Akechi shows a small room that is being given to Hideyoshi to call her own. Hideyoshi is looking around the small room in a daze after being in the very big guest room. Akechi tell her that is the reward for what she did today. Akechi barks at her, “Is there a problem?” Hideyoshi back peddles and tells her the room is fine. She asks Akechi for something and Akechi is in her face.
Hideyoshi is now carrying a large flat woven box on her back down the hall. It get out of balance and she fall backwards. It filled with silk that Oda had given her to use. She looks behind her up side down and see a dog with a small helmet on looking at her. She turns over to get a better look at the dog. The talking dog tells her his name is Shiro. She asks him how come he can talk. He says maybe the same reason you’re here. The world contains many mysterious things.

Note: The dog seems to know many things. Like this place is a different world and time. He also knows stuff about her and thing in this world. Hideyoshi ask him how baby are born. He gets a little mad but explains the stork bring them and they are found in the cabbage fields or some times in bamboo stalk.

Hideyoshi “Oh I see. Because this is a different world an all. Then how do I get back?” Shiro starts to think of something. “I doubt it’ll be easy.” She ask if he 100% sure, but he not sure.
Hideyoshi is sleeping and Shiro hear Akechi coming down the hall. Akechi open the door only to find a silk cloth in the way.

She pulls it back and goes into the room only to find Hideyoshi room is decorated with all the different silk material and decorated fans. Akechi slowly looks around and can’t believe what she did with the room, but there Hideyoshi on the floor still asleep. She is very upset as Hideyoshi wakes up. She starts yelling at Hideyoshi for what did with all the Oda silk. Oda shows up and she looks around. She tells Akechi she likes it. Akechi is taken a back. She is mad that a nobody was getting in on the good side of Oda so easily. Akechi tells Hideyoshi she going to teach Hideyoshi what it is to be a warrior.
Hideyoshi is in the courtyard with Akechi in some light armor. There is a score board and Oda sitting on the deck of the house watching the match. I think she know that Akechi mite be a little ruff on Hideyoshi. There are six matches.
Hideyoshi is checking out her outfit. They announce the first contest.

It is Akechi main skill of knife throwing. She holds three knifes in each hand between her fingers. Akechi Steps up. She run flips and twists throwing all her knifes. The knife all hit there target and the last one splits the target in half. Oda is happy. Akechi did what is expected. Hideyoshi is stunned at she just saw. Now she has to throw knifes.

She closes her eyes and throws. She open her eyes to no knifes has reached there target. Akechi takes two steps to the side and suddenly all of Hideyoshi knifes fall all around Hideyoshi. The knifes almost hitting Hideyoshi. Oda is bewildered.
Next is the bow and arrow. Hideyoshi watches Akechi setup for her shots. She try’s to pull back the bow string, but can’t pull it all the way. 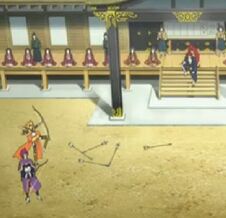 All of the arrows windup in front of Hideyoshi feet.
The next test was using the sword. There are reed bundle on a pole. Akechi one clean move, pull out he sword in front of her and a swing across in front of her. The bundle is cut in half. 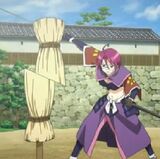 The next is the staff. The staff seem to be little on the light side and has a padded cloth ball at one end. Akechi starts her attack and Hideyoshi is dodging in all different way to keep from being hit. Hideyoshi is on the ground. Akechi goes in for the attack blow, but Hideyoshi swing her staff and blocks it easily.

They are both are surprised. Hideyoshi jumps up and runs to one side. She remembers she has seen that move before. She starts to run around the courtyard. Akechi try to keep up. She is buying time to think. Then she remembers movie and the main character name was Kung Fat.

He was over weight, but was a master of the staff. She runs out to the middle of the courtyard in a challenge stance 15ft in front of Akechi. Hideyoshi has confidence in her face. Akechi does know what has change in Hideyoshi. Hideyoshi is playing the moves back in her head of Kung Fat. She starts flipping the staff around, but almost looses it and gets back into the stances. Akechi ask what was that. Hideyoshi explains it is Kung Fu. Akechi doesn’t know any about it Kung Fu.

Hideyoshi does a come on move with her hand to Akechi. Hideyoshi blocks Akechi attack. Hideyoshi goes on the attack. Akechi goes on the defense. The battle goes back and forth. Oda leans forward watching the battle. Akechi block one of Hideyoshi thrust attacks and puts into the ground. This causes to fly over head and Hideyoshi does a flip and comes down with a blow, but Akechi manages step to the side just in time.

Hideyoshi was surprise Akechi was not where she thought she should be when she comes down with her staff.

Hideyoshi looses again, but Oda is imprested. Oda ask Hideyoshi where she learns that. She tells them from TV which they don’t have any idea what she is taking about. Oda says Hideyoshi moves like a monkey. So Oda is going to call her Monkey. Hideyoshi is too happy about that. She asks to be called Hideyoshi. Oda tell Hideyoshi she is to be her retainer. She is to call Oda My Lord. Akechi is mad that a nobody, no none thing, and can’t win at any contest to become a retainer to Oda. Hideyoshi has no idea what a retainer.
Later Hideyoshi asks Shiro what a retainer. Shiro tell her it’s an honor wasted on you.
Date Masamune and Akechi are walking between buildings.

Akechi tell Date that she has checked the ancient scroll Date has given her. Akechi tells Date Imagawa Yoshimoto has the armor’s left leg. Akechi say she and Oda are going to negotiations with Imagawa for it. Date sees Hideyoshi and asks who she is. Akechi tell her that Oda had brought her in a while ago. Akechi complains that Oda had brought in someone we know nothing of. Date seem to be interested in Hideyoshi for some reason.
Hideyoshi with Shiro through a ball for Shiro. Shiro just lays there and tells Hideyoshi he doesn’t like behaving like a dog.

Retrieved from "https://battlegirls.fandom.com/wiki/BattleGirls_Full-1.2?oldid=4193"
Community content is available under CC-BY-SA unless otherwise noted.