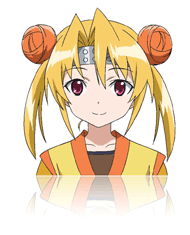 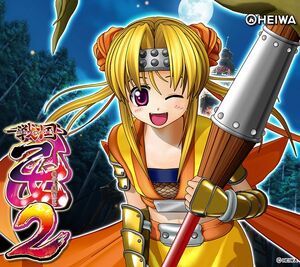 In the Game with the Hammer 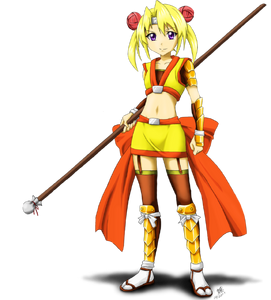 In the Anime using the pole weapon

Hideyoshi in the Pachinko game she is a warrior like the other character with this large hammer. Hideyoshiin the anime is an average student who has to brush up on her history knowledge of Feudal Japan for a test in order to avoid summer classes. Walking home she hears someone talking of praying to the gods and got what he what’d. She sees the steps going up to the shrine. She climbs up the long steps to pray for her success. She sees no one, but a pay yourself for a pray packet. She pays and drops a coin. She sees a light coming from inside the shrine and she looks in. She spots a woman performing a strange ritual inside the shrine. Glowing light is coming from the symbol on the floor. Symbol razes up. Just then her handbag slips and makes a noise. Woman gets up to see what it was. Hideyoshi steps back and fall back onto the coin catcher and grabs a rope. She looks to see a large round bell hooked to the rope falling down towards her. She jumps out of the way only to fall backward through the door of the shrine. When she is spotted, she clumsily stumbles towards the woman. The woman catches her. The woman looks back at the spell and said “Oh no.” and they both disappear in a flash. When Hideyoshi comes to, she finds herself in a forest. To one side discovers a blazing village. Going down the slope where a warrior resembling her friend Akemi is fighting against some vandals. Before vandals attack a scantily-clad mysterious woman with one swipe of her sword defeat the vandals.

The two women take Hideyoshi back to their palace on top of a large hill, where they introduce themselves as Oda Nobunaga and Akechi Mitsuhide, and become curious about the technology Hideyoshi has. Hideyoshi try’s to get a signal, but she doesn’t know she is not in her time period or place. Nobunaga see it doesn’t work so she hit it and said “If a cuckoo won’t sing, kill it”. Hideyoshi jumps on top of her phone and gets the phone back. Hideyoshi attempts to leave to find her way home, but gets lost on the outside of town. Nobunagaon on a horse comes up to Hideyoshi. Seeing she is lost, take her back to the castle. Nobunaga reveals her ambition to gather the pieces of the Crimson Armor. Hideyoshi innocently agrees to help her.

Later, Hideyoshi is approached by a helmet-wearing white dog named Shiro who, to her surprise, is somehow the dog is able to talk. The Shiro seem to know more than he letting on to. With Hideyoshi slowly seeming to think that she has time and place warped to the Sengoku period, but with historical figures portrayed as women instead of men.

She has to try to learn a skill by competing with Akechi. She tries Bow, Knifes, Sword and fails. 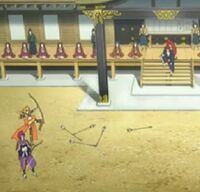 She tries a bow.
Arrows fall in front of her 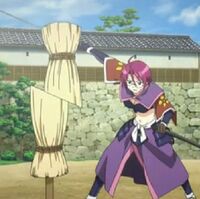 She tries the Sword

The Scoreboard show how Bad She is

She finds something she good at.

She had watched Kung Fat Moves and the pole movement he used. She started using it against Akechi and was able to block Akechi attacks. She still needs more practices. 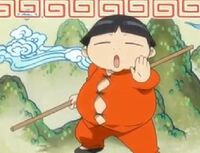 She saw it on Kung Fat Moves

She does a Come On

She goes on the Attack

She good, but need practices

Note: In the Pachinko Game she is the same level as the other characters fighters. She uses a very large hammer that looks like a large gourd with a flat bottom on a end of a staff. Itis about as big as she is.

Retrieved from "https://battlegirls.fandom.com/wiki/Hideyoshi?oldid=4513"
Community content is available under CC-BY-SA unless otherwise noted.